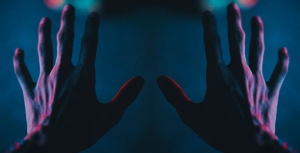 His clenched fists were furiously thrust up, but when his hands opened they were covered with his brother‘s blood.

This concluded one of the most compelling scenes of John Huston’s classic film The Bible—Cain’s murder of Abel his brother (1).  As many know, Cain and Abel were Adam and Eve’s first sons.  Abel was a “keeper of sheep.” Cain was a “worker of the ground.”  Each son made an offering from the work of his hands.  God had set the precedent with the sacrifice of an innocent sheep for its skin to cover the shame of Adam and Eve’s sin (Genesis 3:21).

In the film, Richard Harris captured Cain’s character—reluctant giver of offerings from his fields.  Abel faithfully offered a sheep from his flock.  God’s immediate response to their offerings made it clear they both understood what was expected (Hebrews 11:4). Apparently, Cain felt his offering was disrespected and he burned with resentment.  After God warned him to take charge of his anger, Cain instead chose to hunt down his brother and commit the first murder.

Then Cain simply went back to his field to work.  So God sought him out and asked, “Where is your brother Abel?” Cain just kept working, but his guilty posturing suggested he might soon snap back, “Can’t you see I’m working here?” Then God asked again, “Cain, where is your brother?” That finally triggered those infamous words, “I do not know; am I my brother’s keeper?”

Some time after, I was at party talking with a characteristically feisty friend who challenged the motives of Christians trying to help self-destructive people.  Finally, his tone turned resolute saying, “I can prove I’m right from the Bible!  Doesn’t it say, ‘Am I my brother’s keeper?’” I was literally jaw-dropped.  I paused, and finally responded, “Do you realize you just quoted a murderer?”

I knew my friend fairly well, and I believe he was not ignorant about this primal story from the Bible. But how could he get the point of the story precisely upside down?  I believe we all struggle with this essential truth, because of our natural desire to substitute religious activity for humble faith. Think about what we usually do.

It is rare, but I sometimes find myself in an argument with my wife.  When this happens, we usually head to different parts of the house—justified as a means of deescalation—and then start working.  There can be various reasons we “go to work,” but when I finally realize it’s time for reconciliation, I try to sincerely apologize for my wrong words or actions.  I am usually (always?) the one in the wrong.

It is this delay tactic that often results in a kind of self righteous work that I call the “work of Cain.”  It is during that time we tell ourselves, “I didn’t do anything wrong!  If they hadn’t said it in that way!  I’ll just give them time to realize how wrong they were!” And, “Look at me, I am actually doing good!” (Note the bad grammar.)

This is where that scene from the movie comes in.  When Cain furiously stretched up to implore God, he raised his hands forgetting they were covered with his brother’s blood.  This was the first death that God warned would be the result of Adam’s sin (Genesis 2:17; 3:19).  But what followed was the first futile attempt at “good works.”  We all find ourselves following Cain when we attempt to justify ourselves before God with sin-stained hands.

Now here, we really must contrast the “work of Cain” to the “work of Christ.” Jesus alone is sinless and in right relationship with God.  Only he has clean hands.  Therefore, only Jesus can do “good works” because goods works are the result, not the cause of a right relationship with God (Mark 10:17-18).  This is the chief reason Jesus was put to death by self-willed and therefore self-righteousness people.  Only Jesus could declare about his Father’s work, “It is finished!” (John 19:30). The reason? Unlike Cain who willfully chose his own “good work” to justify himself, Jesus willingly accepted his Father’s “good work” of the cross to justify others.

You were ransomed from the futile ways inherited from your forefathers, not with perishable things such as silver or gold, but with the precious blood of Christ, like that of a lamb without blemish or spot. (1 Peter 1:18-19)

His clenched fists were forcibly thrust up, but when his hands opened they were covered with his own blood.

Therefore, we must all ask, in what do I put my faith—the work of Cain, or the work of Christ? (2)